I've been a busy boy and haven't updated this site in quite some time... it's due for some love. Please don't mind me, from a few years ago... 🙃

My professional background is in interactive product design and development: I came up launching some big digital/music/video products as a Senior Producer at MTV (via an intense PA > AP > Producer track), and more recently led digital production for an acclaimed Sony Pictures Television show, where I won an Emmy Award as part of a great team.

I’ve since founded the digital agency Silent Partners, where I lead product design and development. I’ve executed and produced dozens of high-stakes projects: from developing multi-platform video solutions to managing complex advertising integrations for Fortune 500 clients, I’ve overseen the design, development, and launch of dynamic interactive experiences and ecommerce applications for some of the largest media, wellness, fashion, biopharma, gardening, and hydroponics-related companies in the world. (Client list available upon request.)

I also co-founded the production + publishing company Exit Strategy and co-created the independent web series The West Side — the series captured worldwide acclaim and I won the 2008 Webby Award for Best Drama Series. I was named one of Filmmaker Magazine’s 25 New Faces of Independent Film; the magazine heralded The West Side as “ingenious low-budget independent filmmaking that just happens to be viewable only on the Web.”

In my “free” time, I lead technical development for a cutting-edge interactive publishing platform as part of an ongoing personal project: a vibrant story called Max & Charlie. The project is being made into a feature film, video game, and graphic novel — what I like to call an “indie tentpole” model. The graphic novel was published in 2016 was called “one of the best indie graphic novels of Fall”; we’ve won a few industry awards since. Stay tuned for the interactive ebook!

I was born in California, raised in the Pacific Northwest, went to university in Los Angeles, and moved to New York after graduating; I called Brooklyn home for 15 years, and recently moved to Vienna, Austria. I spend as much time as I can stateside on my new piece of land in Wyoming.

I’ve been humbled to create a few things people loved…

Our no-budget, nights-and-weekends-produced “urban western” series beat out some heavy hitters for the win. Click to check out some episodes!

The fine people of Filmmaker Magazine included me in their annual “filmmakers to watch” roundup (alongside fellow co-creator Ryan Koo). An honor! Click here to read the article!

This one feels a little strange to me, but I was a Senior Producer for Sony/Harpo/Sharecare, helping launch and lead production for the new Doctor Oz property — we won a Daytime Emmy and they gave me an award! I’ll take it!

We independently created and published a truly lovely 112 page graphic novel in hardback and paperback, and won some nice indie awards. Check it out here!

I do my best to create refined products that push the boundaries of modern storytelling.

I’ve spoken regularly on industry panels discussing the state of New Media and independent content distribution and committed my early creative career to pushing the frontier of “transmedia” storytelling.

I more recently went “all-in” on stereoscopic 3D and started concentrating all efforts toward the development of feasible stereoscopic 3D workflows for independent filmmakers (click here to read the “Indie 3D” quasi-manifesto I wrote for Filmmaker Magazine a couple years ago; TLDR, I’m basically getting ready to make Max & Charlie into a badass lil’ indie 3D flick…)

I’ve spent the past decade+ experimenting with, developing for, and writing on the future of independent stereo 3D. At one point I started/ran a site called free3dglasses.com which sent 1000s of pairs of anaglyph glasses all over the world. You’ll see a lot of my 3D on this site… though certainly not as much as I’d like (I’ve been a reclusive artist as of late). I’ll get back to posting my art soon enough!

MAX & CHARLIE is my most recent project: a young boy’s dreamed adventure through the chaos of NYC. An independently-produced graphic novel, feature film, and video game; written, directed, and produced by me. The graphic novel is available now and was called “one of the best indie graphic novels of Fall.” 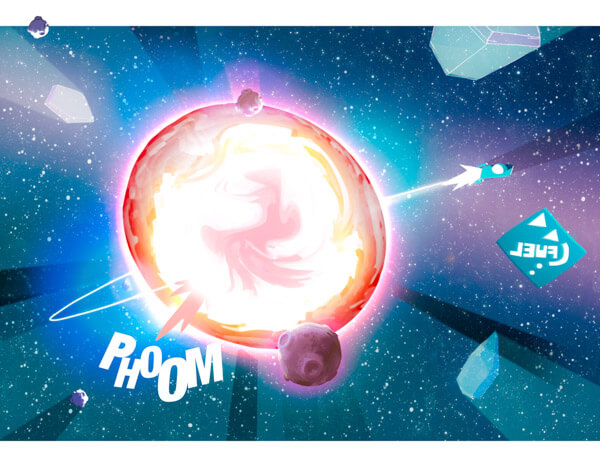 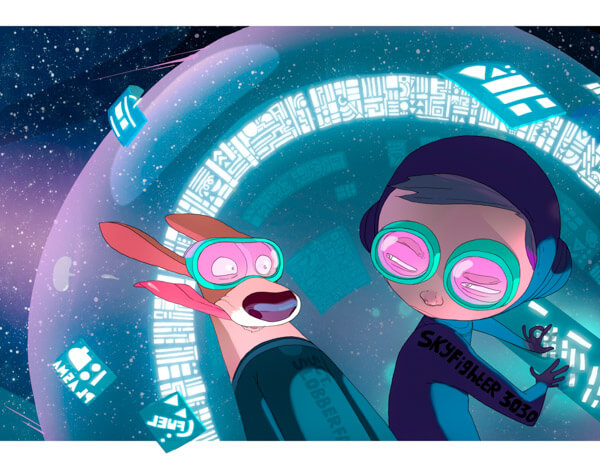 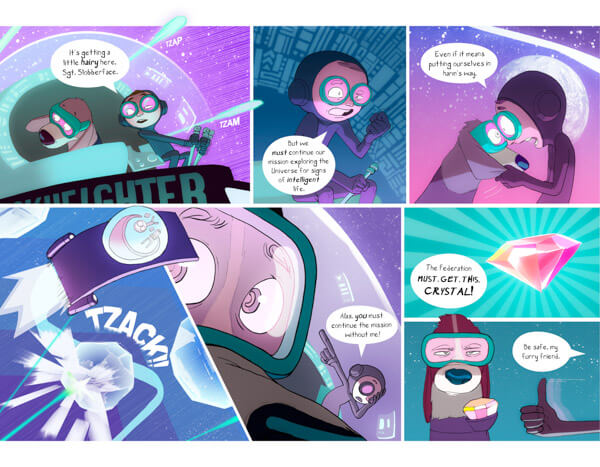 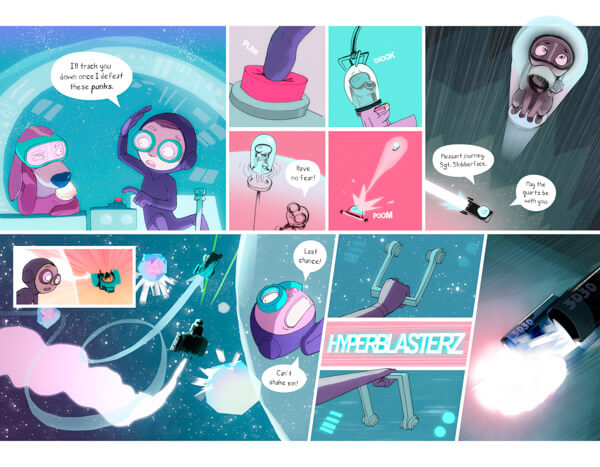 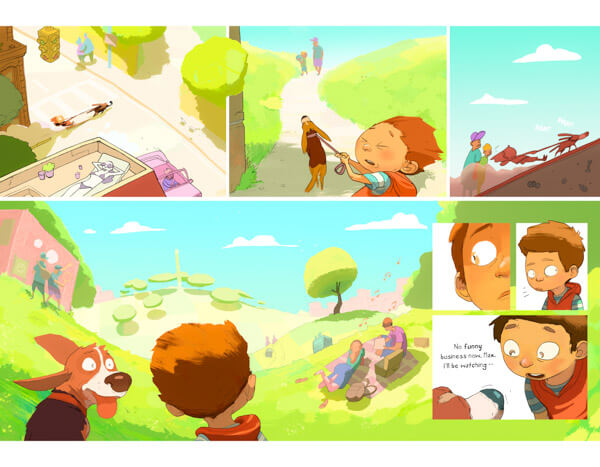 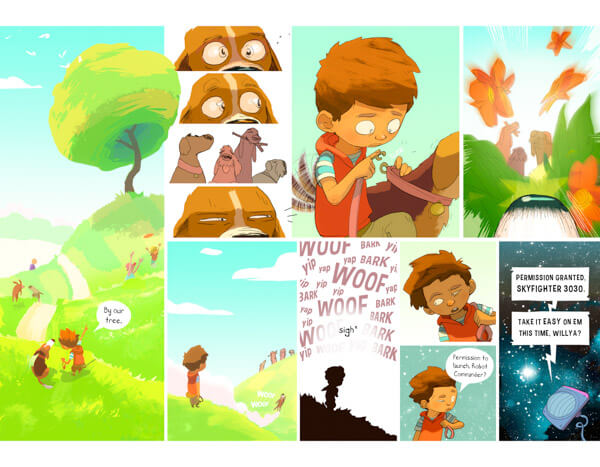 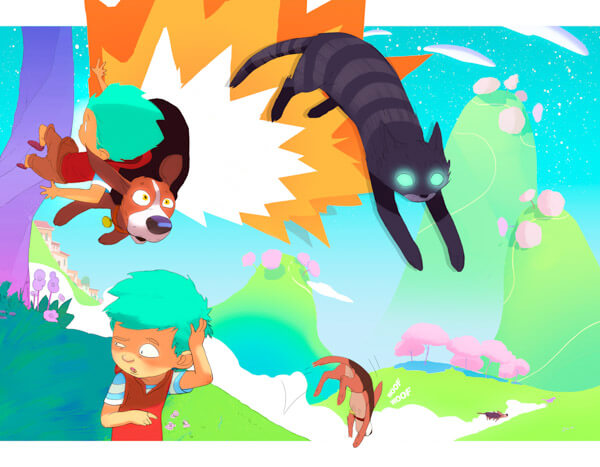 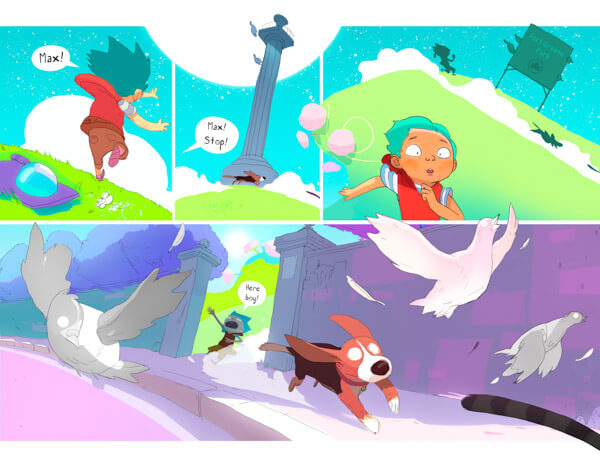 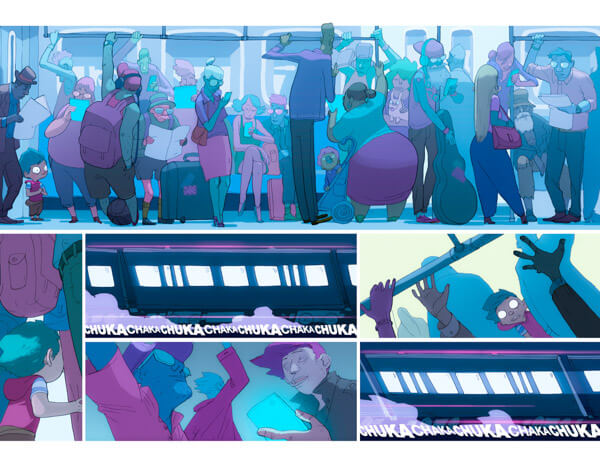 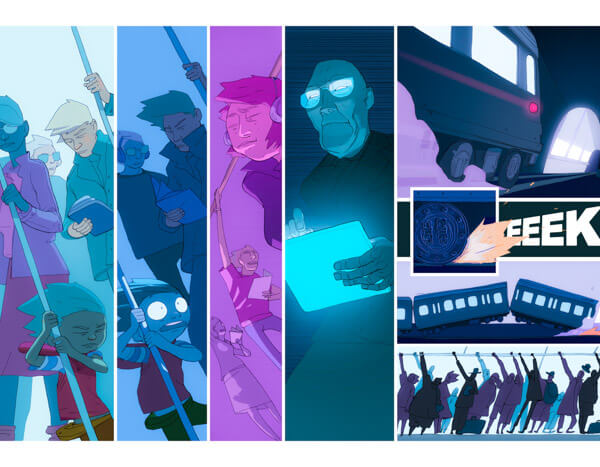 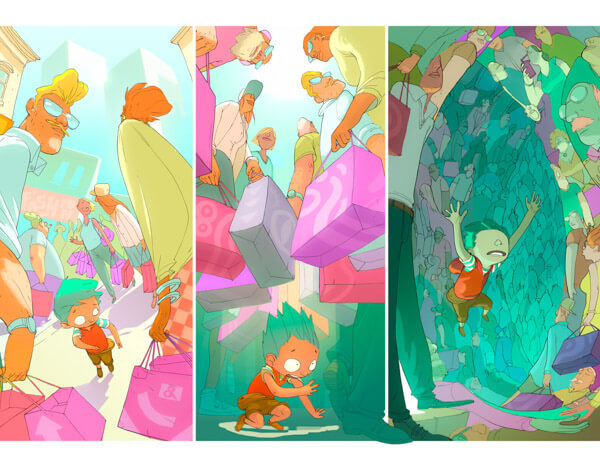 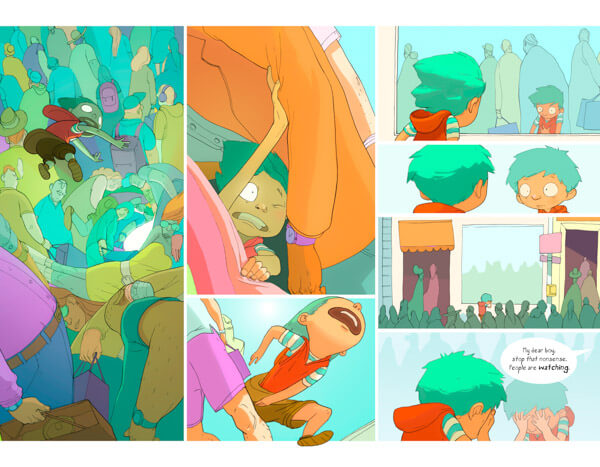 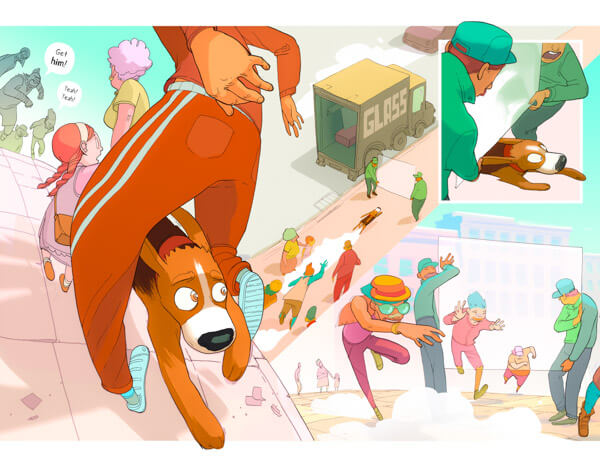 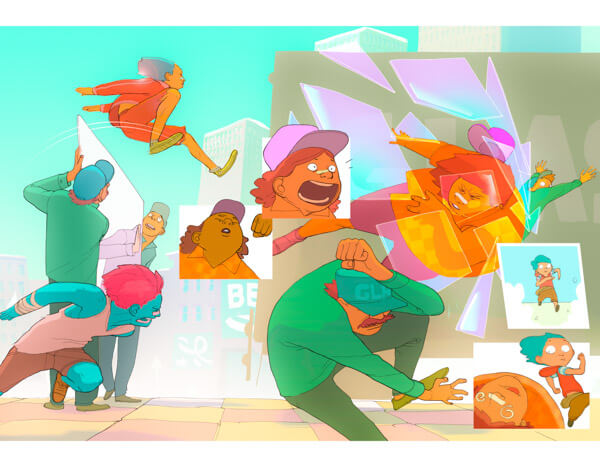 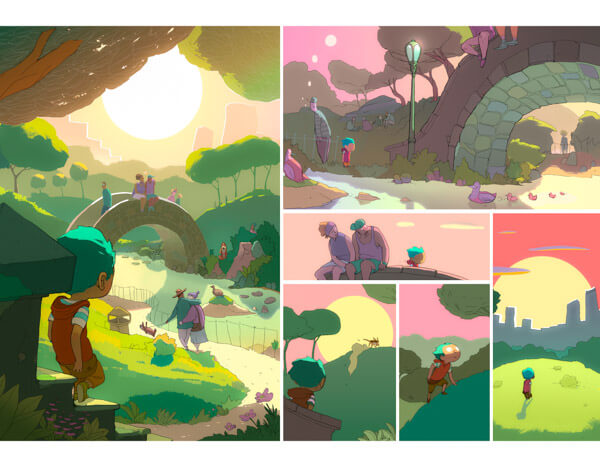 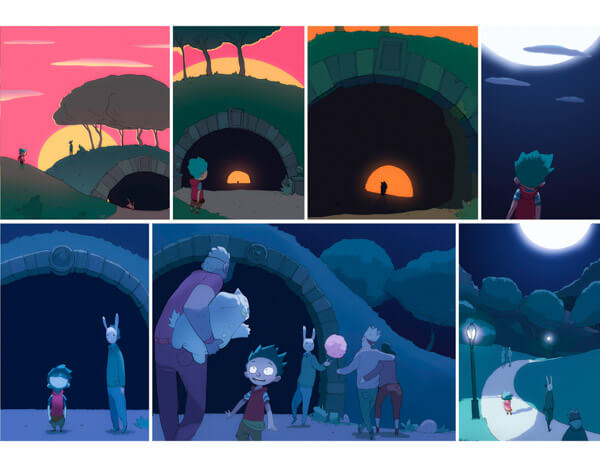 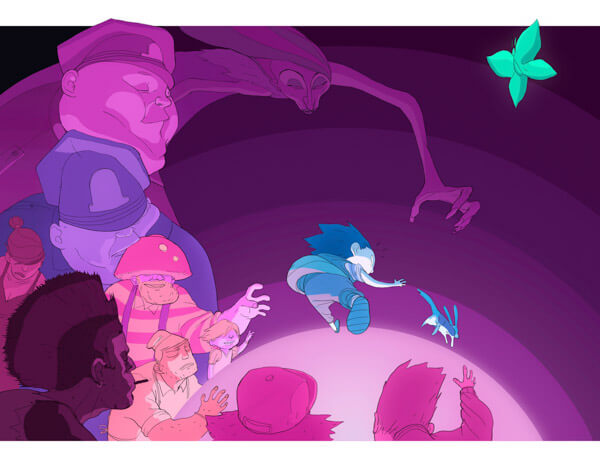 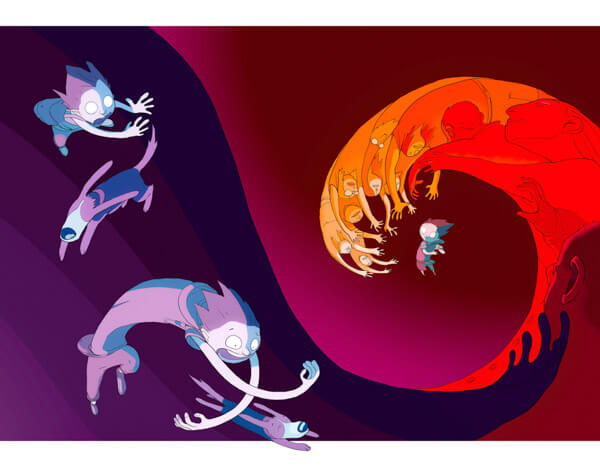 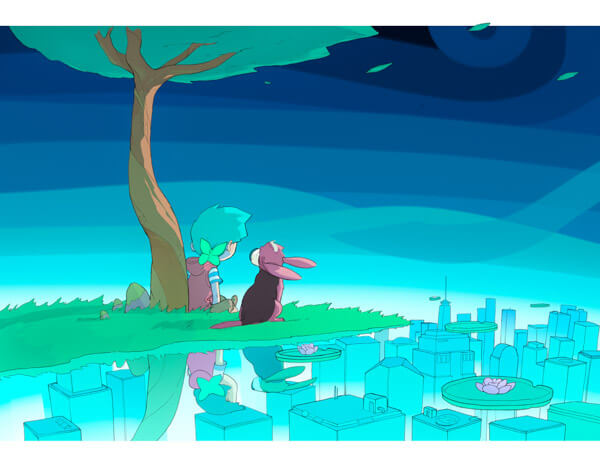 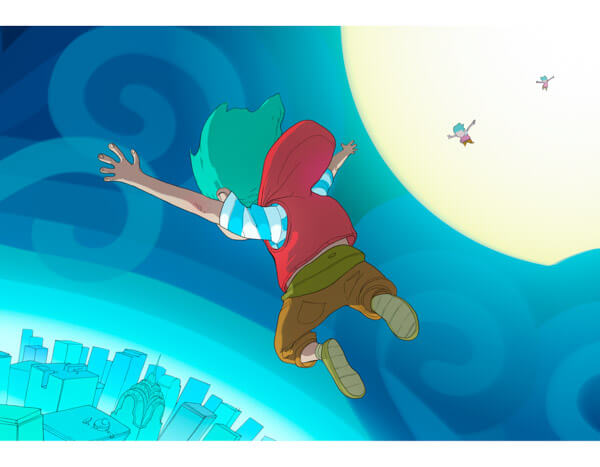 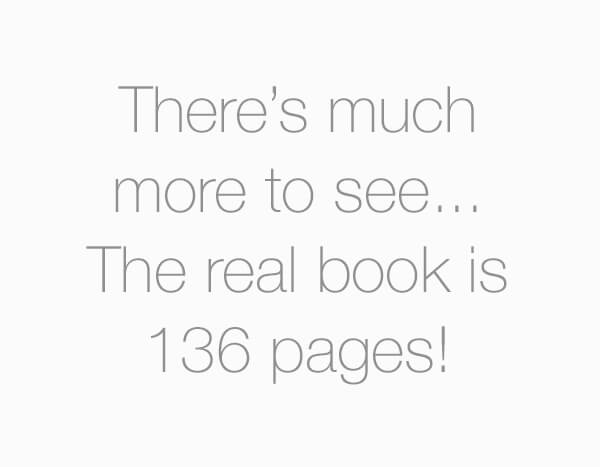 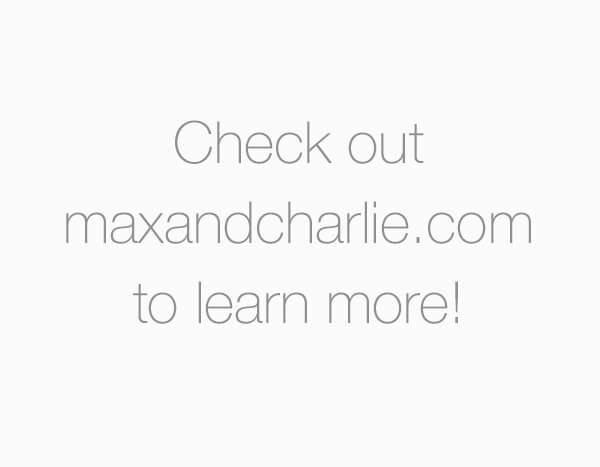 EXIT STRATEGY is the award-winning digital media production company I co-founded and run. We’re mostly working on our own projects these days, but we can help create basically anything you an think of. Get in touch →

Zyndo is a new venture as part of my goal to bring MAX & CHARLIE to the newest generation of digital devices: an advanced creation suite and publishing platform for PC/Mac, iOS, Android, AppleTV, Xbox, Playstation, VR, and AR. More on this soon. Learn more →

The West Side is the no-budget, nights and weekends, Webby Award winning “urban western” series I co-created/produced/directed/etc with Ryan Koo way back in the day. A bit long in the tooth at this point, but kinda holds up! Check out episodes here →

An interactive murder mystery: a pulpy whodunnit for the connected age. (The vid above is just a quick demo we made; does not reflect intended quality.) Selected for Power to the Pixel Pixel Pitch competition and Dogfish Accelerator program for cutting-edge media projects. In development. Learn more →

Our award-winning digital design, development, and production partnership.
We maintain a low profile and give you all the credit: we only focus on quality and our clients. Available worldwide for all kinds of work. Contact us for to see recent work.

Thanks for stopping by! I’d love to hear from you! Get in touch →